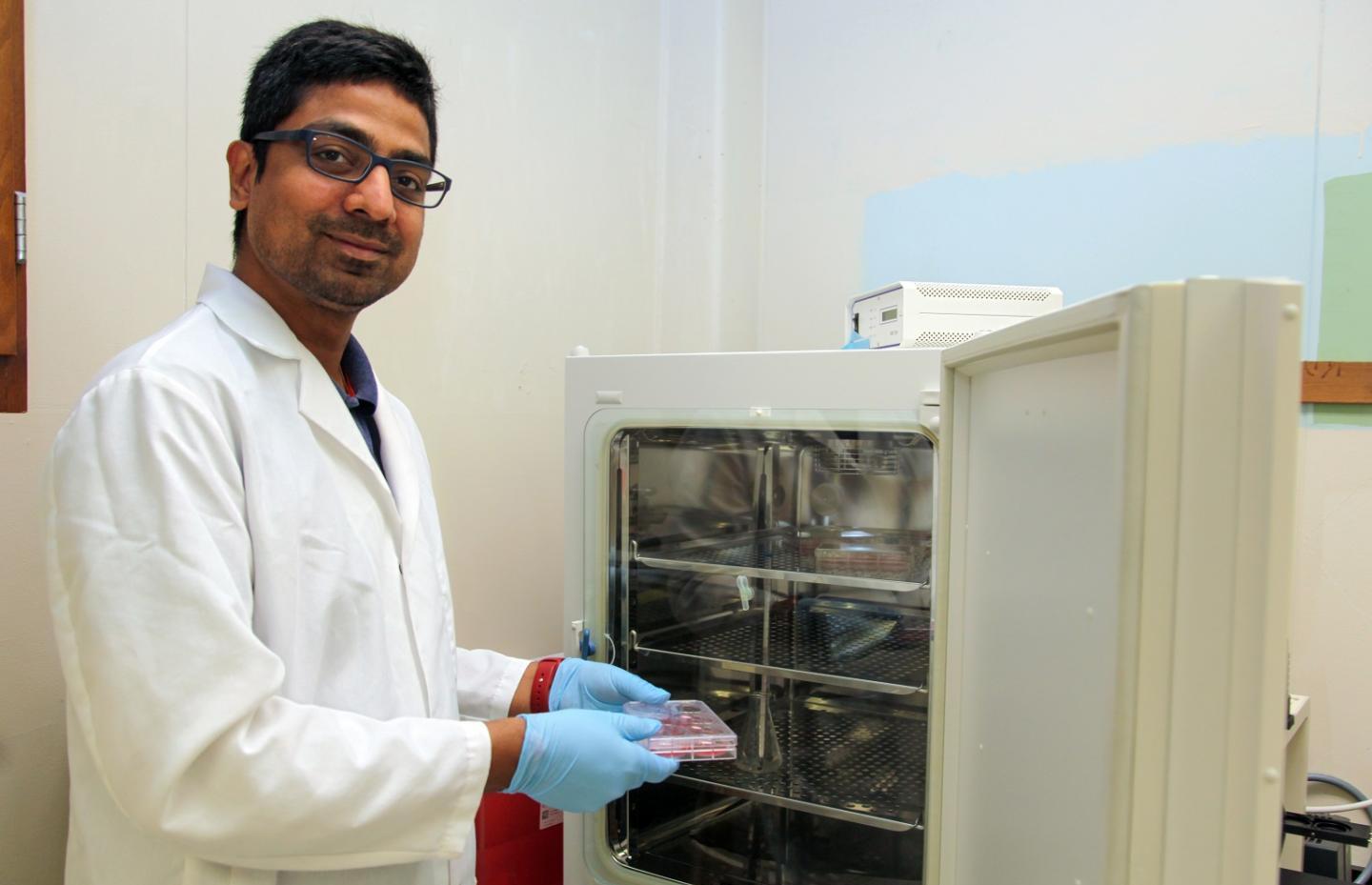 In the hours and days after a traumatic brain injury, inflammation inside the brain can accelerate to the point that more brain damage occurs, says a scientist working to better understand the acceleration and whether interventions like cannabinoids can improve patient outcomes.

While some TBI patients do well, most would benefit from therapy to create a better balance between the vigorous inflammation needed in the immediate injury aftermath to clean up the site and the deceleration needed to complete healing and avoid more brain damage, says Dr. Kumar Vaibhav, translational neuroscientist in the Department of Neurosurgery at the Medical College of Georgia.

“You cannot suppress the entire pro-inflammatory process otherwise it would be difficult to recover from your injury,” Vaibhav says. But in this case, there is too much inflammation, a major factor in the reality that one-third of hospitalized patients with a TBI die from damage that continues after their acute injury.

The aftermath of concussions, essentially a closed-head injury, in football players is another case. Immediate problems might include a headache, dizziness and fogginess but ongoing memory and sleep problems, depression, as well as epilepsy, Alzheimer’s and Parkinson’s also can later occur.

Neither surgical nor medical intervention typically enable control of inflammation to limit the secondary destruction, and better understanding inflammation in the brain is a major barrier to successful treatment, the scientist says.

Vaibhav is principal investigator on a new US$1.8 million grant from the National Institute of Neurological Disorders and Stroke further exploring the role of the body’s endocannabinoid system — identified by researchers studying the mind-altering effects of THC, and now known to play a role in immunity, sleep, memory and even reproduction. Its involvement appears to start with the physical injury that happens to our brains.

With a TBI, the injured brain cells’ plasma membrane, which helps contain the cell’s contents, ruptures, releasing lipids, or fats, a major component of the membrane, throughout the body. Two key endocannabinoids, 2-AG and AEA, which are also lipid molecules, also get released from the damaged membrane where they are made. These molecules are supposed to bind with endocannabinoid receptors and activate the endocannabinoid system to help regulate the immune response. The two main endocannabinoid receptors are CB1 and CB2, and in this case, the 2-AG’s target appears to be CB2 receptors, which are found on immune cells and known to reduce inflammation and related problems like swelling and blood vessel dysfunction.

“Within 24 hours after an injury, we see CB2 receptor activation and expression go up with 2-AG secreted in the blood,” Vaibhav says. “It’s a very quick response.” Trouble is, the injured cells also release an enzyme called MAGL and the now-free-floating lipids further activate it.

MAGL, or endocannabinoid-metabolizing enzyme monoacylglycerol lipase, as its long name implies is an enzyme whose job includes degrading 2-AG once it has done its job. Activation of MAGL is known to worsen TBI outcomes but exactly what it does after TBI is not well understood, Vaibhav says.

Vaibhav and his colleagues think the problem is that high MAGL appears to degrade 2-AG before it can play out its important anti-inflammatory role. He theorizes that high MAGL levels become instead a switch that turns up inflammation after TBI. He also has some evidence that reducing MAGL levels can help restore a healthy synergy between MAGL, 2-AG and the cannabinoid receptor CB2, making it a key point for intervention.

His research team is using both a research drug that inhibits MAGL and the cannabinoid CBD, which they have early evidence also inhibits MAGL, to see if they are correct.

His team has found reduced 2-AG in the cerebrospinal fluid of people with TBIs, but exactly why it was happening was unclear. In their laboratory model of a TBI, they have also found that MAGL levels are high while 2-AG levels are low, suggesting a link. And, that when they selectively activate the CB2 receptor early after a TBI, immune cells like macrophages are less inclined to promote inflammation, that swelling and blood flow are improved, and so are outcomes. Conversely, immune cells that are very inflammatory have high levels of MAGL inside, more evidence for their reasoning that when MAGL is high, it’s degrading too much 2-AG before it can go bind with the CB2 receptor and calm inflammation.

When they have reduced MAGL levels with the research drug, 2-AG concentrations went up, so did its binding to CB2 receptors, and immune cells began to favor reducing inflammation, findings which they published in 2018 in the journal Brain, Behavior and Immunity. “It’s actually polarizing macrophages into anti-inflammatory,” he says.

A major focus of the new grant is to look at what early inhibition of MAGL in immune cells — with the research drug, cannabinoids as well as commercially produced versions of the endocannabinoids 2-AG and AEA — does to the enzyme’s apparent natural predisposition to accelerate inflammation following a TBI.

“If we inhibit MAGL or over activate it, what happens?” Vaibhav says, of answers he is pursuing to better define MAGL’s role. He and his team are looking again to see if reduced activation of the CB2 receptor by 2-AG in the face of high MAGL is key to injury progression. And, whether progression includes affecting the white matter — brain tissue full of nerve fibers that enable connections between different parts of the brain and the spinal cord — and worsening problems like dementia.

He is inhibiting MAGL to also see how that plays out, and wants to learn more about why MAGL levels don’t just return to normal on their own. He also wants to connect the dots with yet another lipid, prostaglandins, which are made at the site of an injury, and whose many roles include promoting inflammation, because when MAGL degrades 2-AG, it enables more prostaglandin production.

Vaibhav also wants to know if MAGL and/or 2-AG levels right after an injury are biomarkers of whether a patient will have destructive secondary damage.

In addition to honing in on the best place to intervene and whether the research drug or CBD can do it, they also have to find the optimal time for intervention, so they don’t interfere with the initial aggressive immune response needed to clean up the injury.

“We need to find the optimal dose and time to intervene,” Vaibhav says. “You have to know how many immune cells are activated, how long they are activated and when they are going down or suppressed to help determine the optimal time for treatment, and that is one of the things we are trying to do.”

Macrophages are a type of immune cell that are early arrivers to an injury site to digest debris and stimulate tissue repair, and can both promote or deter inflammation. Vaibhav’s lab and others have shown that more than a month after a TBI, macrophages have shifted from an early role in suppressing inflammation to chronically promoting inflammation in a vicious, destructive cycle where inflammation damages neurons, which produces debris, which increases inflammation.

In fact, an accumulation of inflammation-promoting macrophages has been seen in the corpus callosum, which connects the two hemispheres of the brain and enables their communication, in more than 25% of people with TBIs, an accumulation that correlates with brain damage two decades after their injury.

Once immune cells get activated, their instinct and function is to scavenge cell debris, which is a good thing essential to healing. But when they stay activated, the cells also start digesting healthy brain tissue and the size of the damage increases, Vaibhav says. Once an enzyme like MAGL gets activated, its major focus becomes staying activated and it will for weeks, he says.

During normal times, MAGL and 2-AG levels are both relatively low inside a cell, including immune cells. MAGL degrades 2-AG if too much gets made for some reason, and 2-AG helps keep inflammation at bay.

The hydrolase FAAH metabolizes AEA, like MAGL does 2-AG. There is not substantial proof to date of the impact of high levels of MAGL on the other major endocannabinoid AEA, but it could be a similar scenario, Vaibhav says.

Vaibhav’s collaborators on the new grant and related studies include MCG neuroscientist Dr. Krishnan Dhandapani, who also studies TBI, and Dental College of Georgia immunologist Dr. Babak Baban, who also studies the endocannabinoid system and the impact of CBD, including on the deadly cytokine storms that occur in COVID-19.

Related Topics:FeaturedMedical Cannabis
Up Next