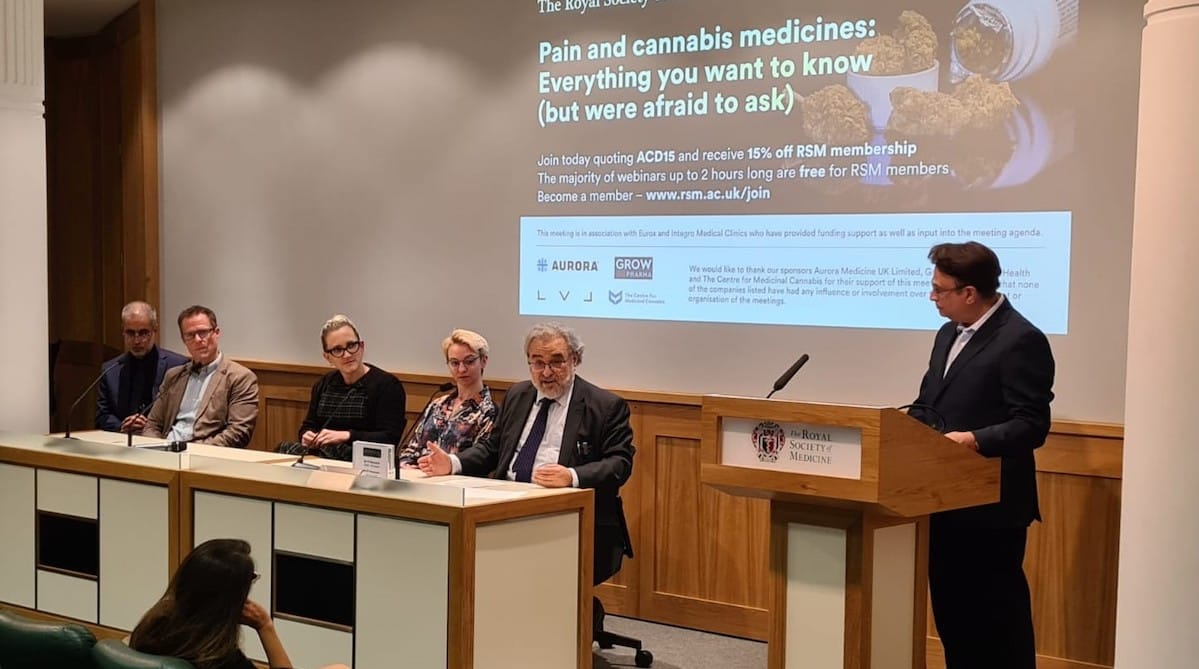 Earlier this month, experts in the field of pain and cannabis medicines presented at the Royal Society of Medicine. Alex Fraser, patient access lead for Grow Pharma, reviews the event.

Real-life in-person events are few and far between in these days of Covid. This is just one of many reasons why we at Grow Pharma were so excited to be a part of last week’s educational event at the Royal Society of Medicine hosted by Integro Medical Clinics.


Aptly titled; Pain and cannabis medicines: Everything you want to know (but were afraid to ask), the event, held on Monday 11 October, was a day-long agenda of presentations from some of the leading experts in their respected fields, primarily medical cannabis prescribing, regulation, pharmacology and research.

Grow was honoured be asked to sponsor the event alongside Aurora Cannabis, LVL Clinics and The Centre for Medicinal Cannabis.

As well as sponsoring, I had the personal pleasure of kicking the day off with a presentation on the history of cannabis and route to legalisation on prescription in the UK (not a brief subject to fit into 20 minutes). I was also asked to host one of the sessions later in the day introducing Integro’s stellar team of cannabis-prescribing specialist doctors. I’m still in awe to have shared a stage with so many individuals that I respect so much. 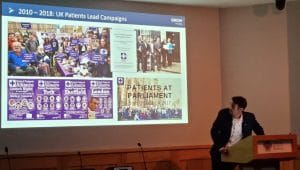 Alex Fraser presents at the RSM

It was fantastic to hear from Professor Raphael Mechoulam calling in via Zoom. The world-renowned Israeli biochemist, now in his 90s, discovered THC and the endocannabinoid system (ECS) and as such is a true legend in the field. Also speaking were the ever-passionate Dr Arno Hazekamp, an independent consultant with extensive experience in the field including seven years as Dutch medical cannabis pioneer Bedrocan’s head of research and the insightful Paul Chrisp of NICE, an organisation it would be negligible not to include in a high-profile medical cannabis event. 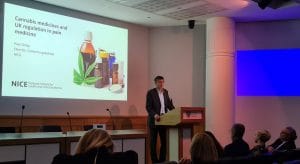 However, it was the clinical team at Integro that were most fascinating. Integro clinical lead and pain specialist Dr Anthony Ordman played the charming host throughout and gave a hugely informative presentation on the uses of different formulations of cannabis medicines. Integro Clinic’s specialist nurse, Sophie Hayes, gets a special mention for organising the impressive line-up of speakers on top of delivering a comprehensive talk on the practicalities of caring for patients prescribed cannabis medicines. 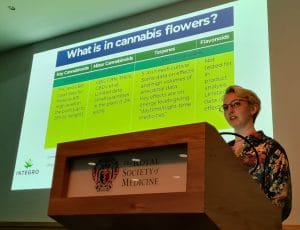 
Oncologist Dr Andrew Gaya gave a powerful talk on the use of cannabis medicines for patients undergoing cancer treatment. He also gave an important review of the evidence to date for cannabinoids treating cancer and reducing tumour size (an area where prescriptions are not currently allowed, and research is still in its infancy).

Dr Gaya spoke about the positive impact seen in one of his patients who had undergone six years of progressive cancer and various treatments finishing by pointing out that the patient was doing well enough that they were present in the room for the talk on their own case study (for those interested the patient has an anonymised Instagram account covering their journey since being prescribed cannabis medicines). 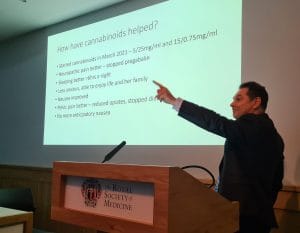 Dr Ayesha Mian of the CMC gave a talk on education for clinicians. Pharmacologist John Brew from cannabis-prescribing clinic LVL Health spoke about their focus on research. Dr Matt Brown was unfortunately taken ill not long before the event but was replaced last-minute by former colleague Eleanor Owen-Jones to give a perspective on clinical research in cannabis medicines.


Each talk was important, illuminating and insightful and, in the coffee breaks, lunch and drinks that followed, attendees, including doctors interested in prescribing, industry professionals from some of the world biggest producers of cannabis medicines as well as regulators, nurses and other HCP’s weren’t shy about expressing how impressed they had been with the whole day.


Among the many cannabis-prescribing clinics we work with at Grow, it does feel Integro have taken it upon themselves to lead the pack. Not only with events like this, but in their day-to-day practice and patient care. They are the only clinic that provides a Monday-Friday 9-5 nurse phone line to support their patients and, from speaking with patients on a daily basis –  often in relation to the good and bad experiences with the various clinics – I can’t remember a patient having a bad word to say of Integro or their team.

Since the event I’ve updated a list of cannabis clinics I use to help inform patients and noted the number of these now in the UK and Channel Islands has trebled since the start of 2021.

Nearly three years since the law change, it’s certainly been a long time coming, but with events like this and clinics like Integro, patients can be assured that they are in safe hands as medical cannabis in the UK starts to grow more rapidly.